EDITORIAL: Be a Force of Nature

Folks, I know that lots of blogs are by nature opinionated -- In more than two years of blogging I've tried to keep this blog focused on the main theme and leave the rest of the world for others to debate, discuss, and flame about.

But I want to share a bit of insight with you on something that could some day save a life -- maybe yours. 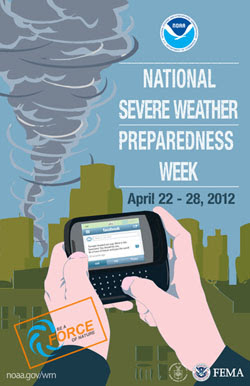 I work for a Federal agency, the U.S. National Oceanic and Atmospheric Administration (NOAA).  We're best known by many folks for being the parent agency of the National Weather Service (NWS).  I've spent a couple decades helping to inform and educate people about the important science and services NOAA provides.  For one, NOAA and the NWS issue weather forecasts and warnings for tornadoes, flash floods, hurricanes, winter storms and more hazards.

This week, April 22-28, 2012, is National Severe Weather Preparedness Week.  If you live in or near tornado alley, you already know to stay alert for tornado warnings.  At our best, given technology and current forecasting knowledge, NOAA issues warnings on average about 12-15 minutes before a tornado strikes.  That's not a lot of time, but if you've thought through your personal strategy for taking shelter, practiced and planned, you are better prepared to act in a severe weather emergency such as a tornado.

This is more than your routine public safety/awareness effort.  Aimed at improving the way people respond to severe weather warnings, campaign planners are embracing social science principles to encourage people to take appropriate actions, and then inspire others to do the same, in real time.

Based on NOAA survey results after the 2011 tornado outbreaks in Alabama and Joplin, Missouri, we know that some people will take shelter immediately after hearing a warning on NOAA Weather Radio or on television.  But, most people typically wait for secondary confirmation before taking shelter. Social science research confirms this. People are more likely to take preparedness measures in advance and action during an event when they observe others doing so.

With a Tweet or a Facebook update sent from a cell phone, proactive “thought leaders” can model the appropriate action for others and encourage them to Be a Force of Nature. You could be one of those thought leaders.

Forces of nature are out there already.  We’ve seen countless examples of forces of nature in recent months: the Grandmother in Texas who protected three small children in a bathtub as a tornado ravaged the home; or Stephanie Decker in Indiana, whose husband sent a life-saving text to her March 2, warning her of an impending tornado, giving her the confirmation she needed to immediately take her children to the basement where she shielded them with her body, severely injuring both of her legs. This NOAA/FEMA preparedness campaign seeks to multiply their impact by starting a national movement for preparedness.  That's where you come in.

Beyond this one week in April, NOAA’s effort to create a Weather Ready Nation will continue.  We’re envisioning similar co-branded efforts with other members of the Federal, state, and local risk management community, academia and America’s weather and climate industry. In the future, we will encourage the public to be a force of nature when it comes to hurricanes, floods, lightning and any other number of extreme weather phenomena.

Check out www.ready.gov/severeweather for the resources you need to become a force of nature yourself.  And if you have a blog, feel free to use the graphics above and the contents of this post and repost this on your blog or on Facebook, Twitter, and through other social media.


We now return control of this blog to my alter ego, Uncle Atom.
Posted by Uncle Atom at 7:59 PM