I've been averaging a couple of estate sales per weekend, and I haven't come home empty handed yet.

Here are a few acquisitions --

Two boxes of Super 8 family home movies. It's sad that people don't keep stuff like this. 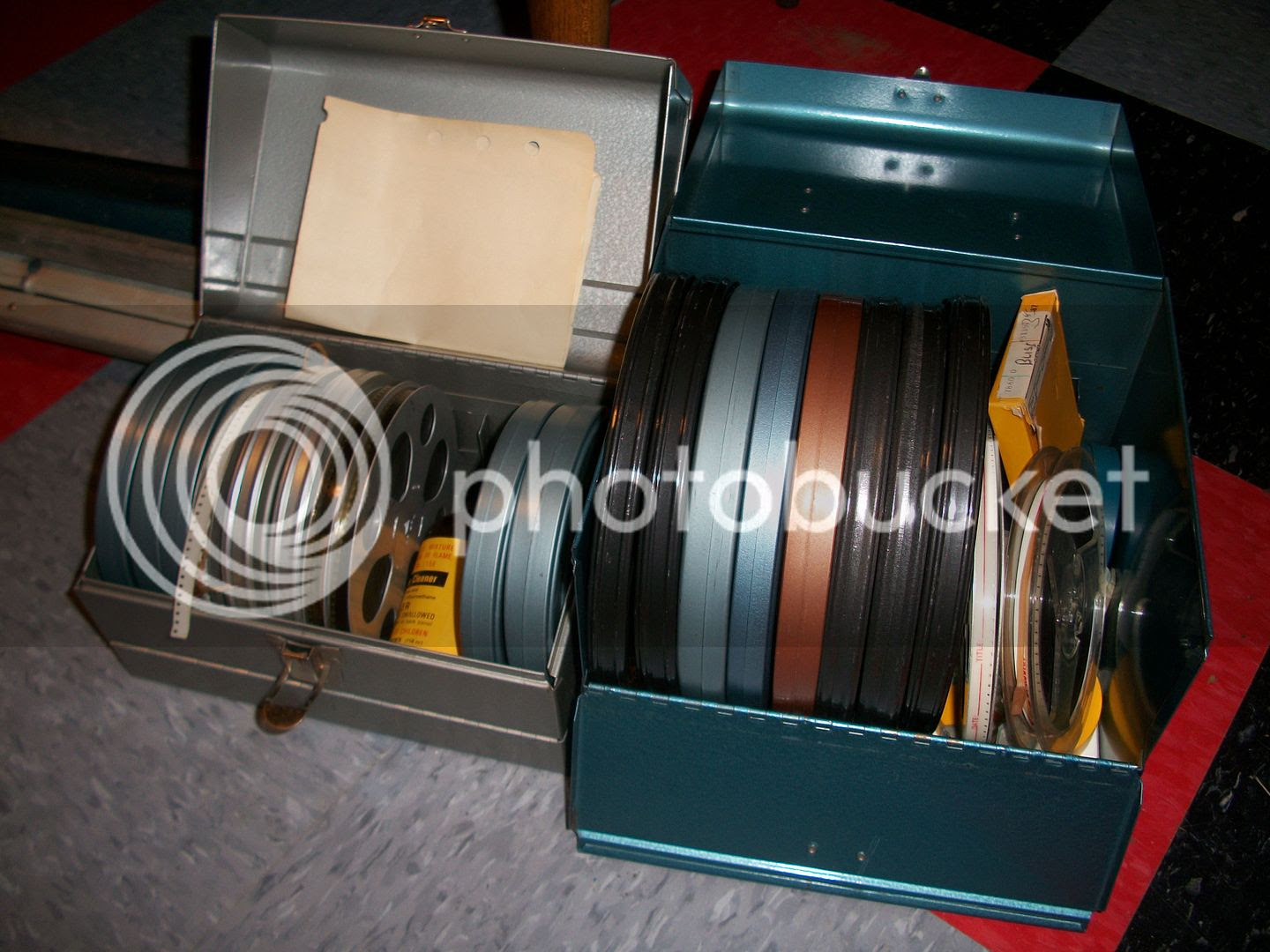 The house had a bunch of equestrian stuff, and from what I can tell from the reels that have labels, a bunch of the films were shot at riding events in the late 1960s -- early 1970s.  Oddly, at another estate sale the same day I picked up an 8mm projector and screen, and that was before I found the films! 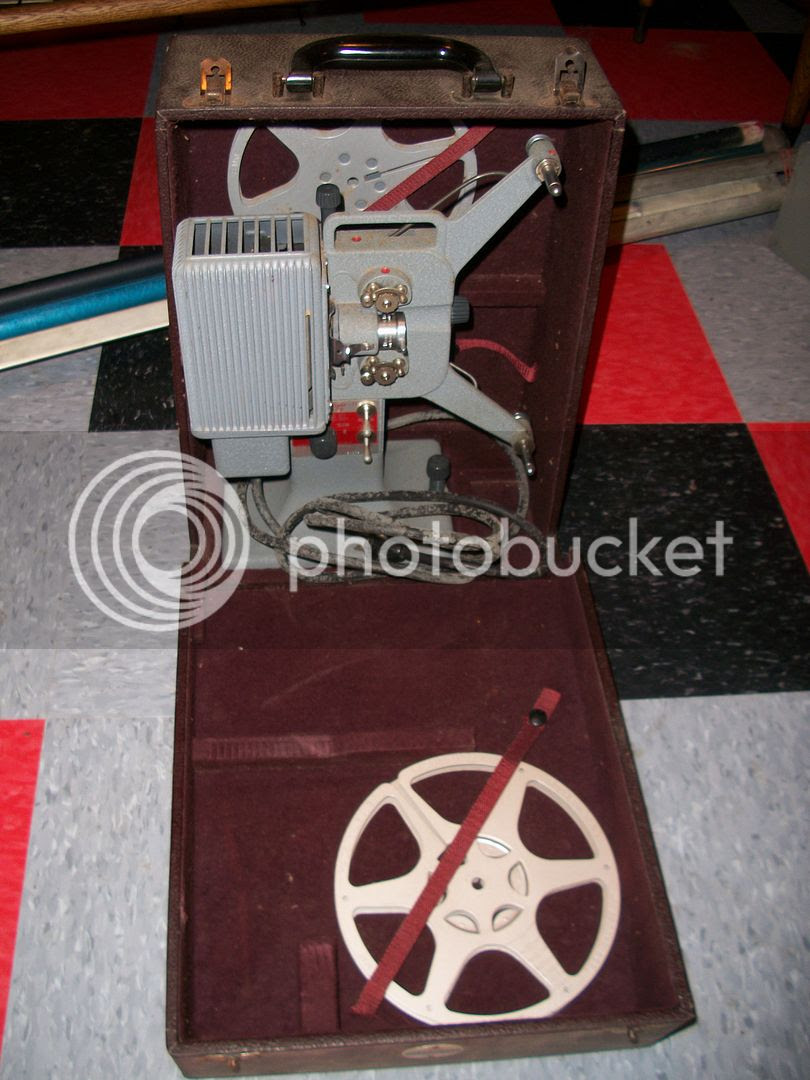 I'll try to set up the projector and try out some of these films to see what we've got. 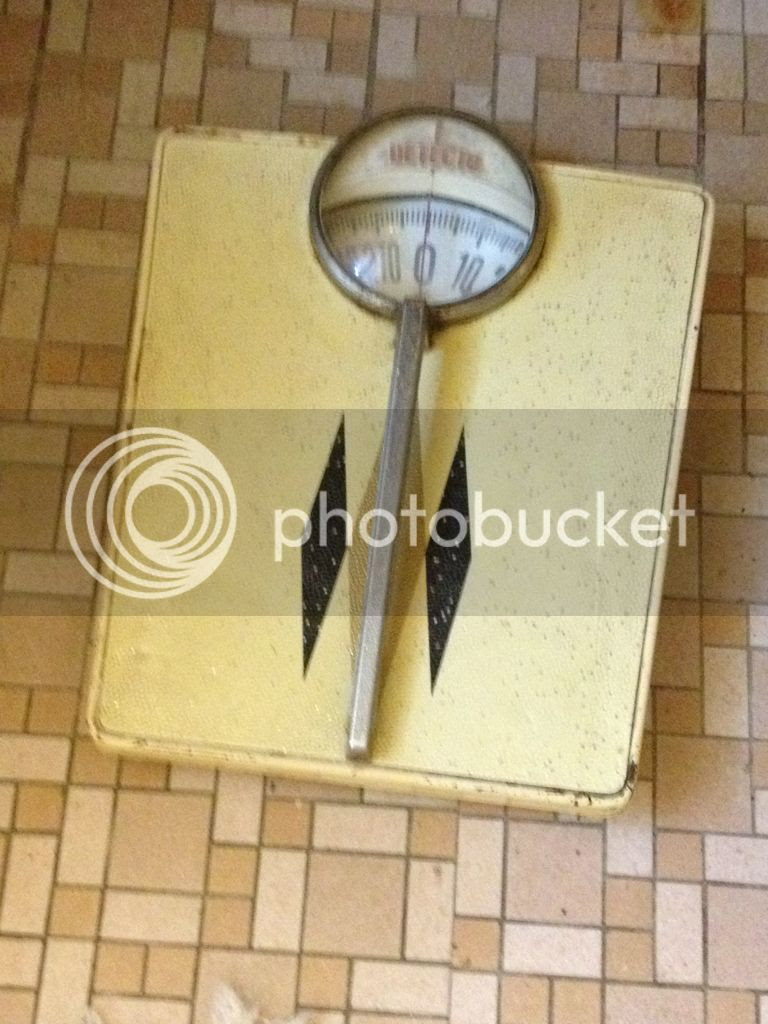 Yellow bathroom scale for pretty cheap - it's just the right color for our basement bathroom with its light yellow and black tile.   It needs a little cleaning, but I've seen worse.  I love the diamond stenciling. 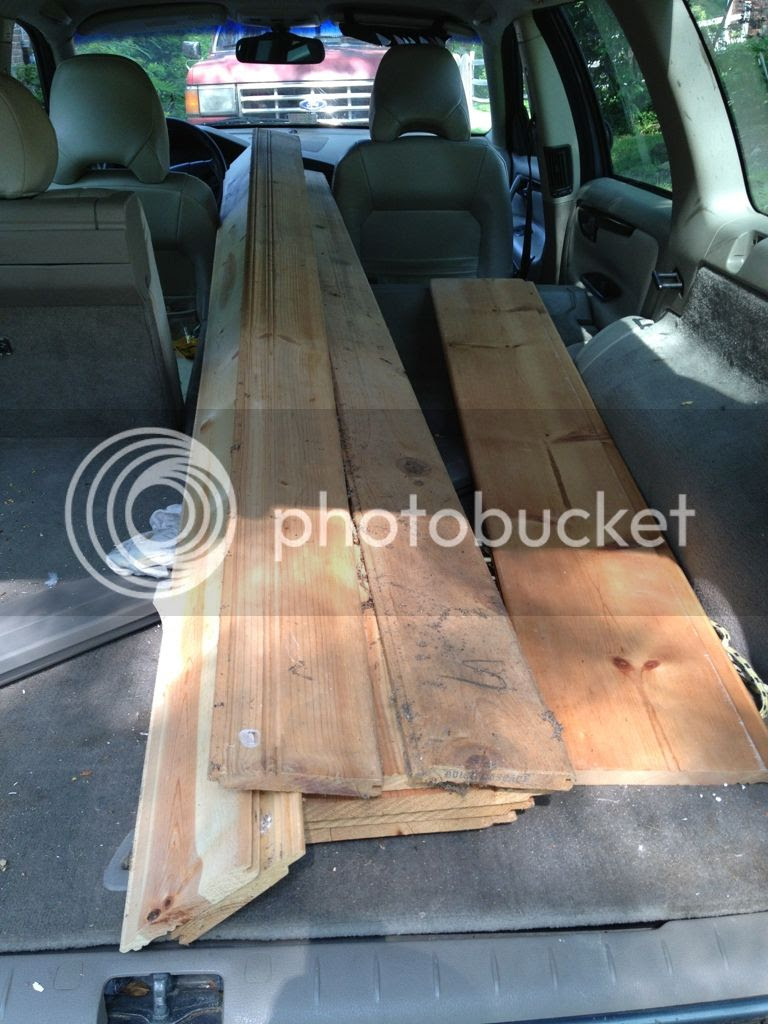 Unfinished pieces of knotty pine.  I've been in a couple of houses that featured lumber and woodworking tools.  The house I was in today had a very organized shed out back, and I noticed some tongue and groove panels up high on a rack, and sure enough, it was this knotty pine.  I got a very reasonable price on it.  It's unfinished, so while it's not quite enough to cover a wall, even if I do a short four-foot run from the floor halfway up a wall, it will be great to have if I find some more knotty pine.  We have an unfinished area in the basement where I can visualize knotty pine walls. 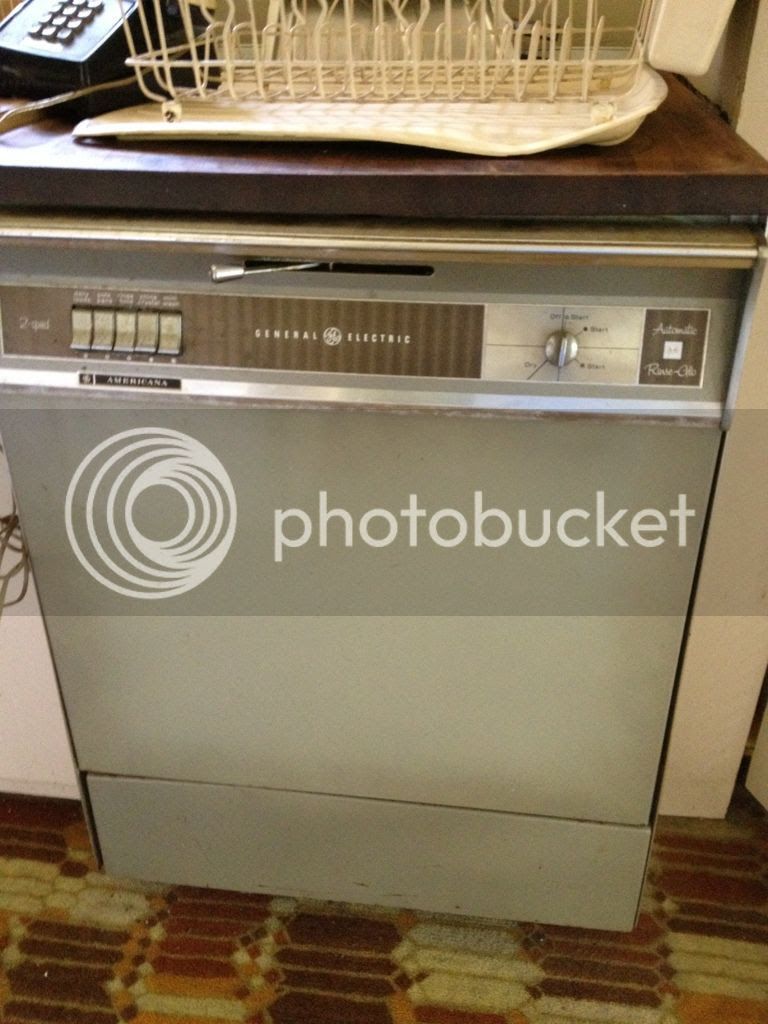 It's the kind on wheels which you move close to the sink, connect a hose, plug in to an outlet and run.  It was cheap, bought during the last half hour of a sale where the old house will be demolished.  Our current dishwasher is broken, and I love the graphics on the face of this thing. 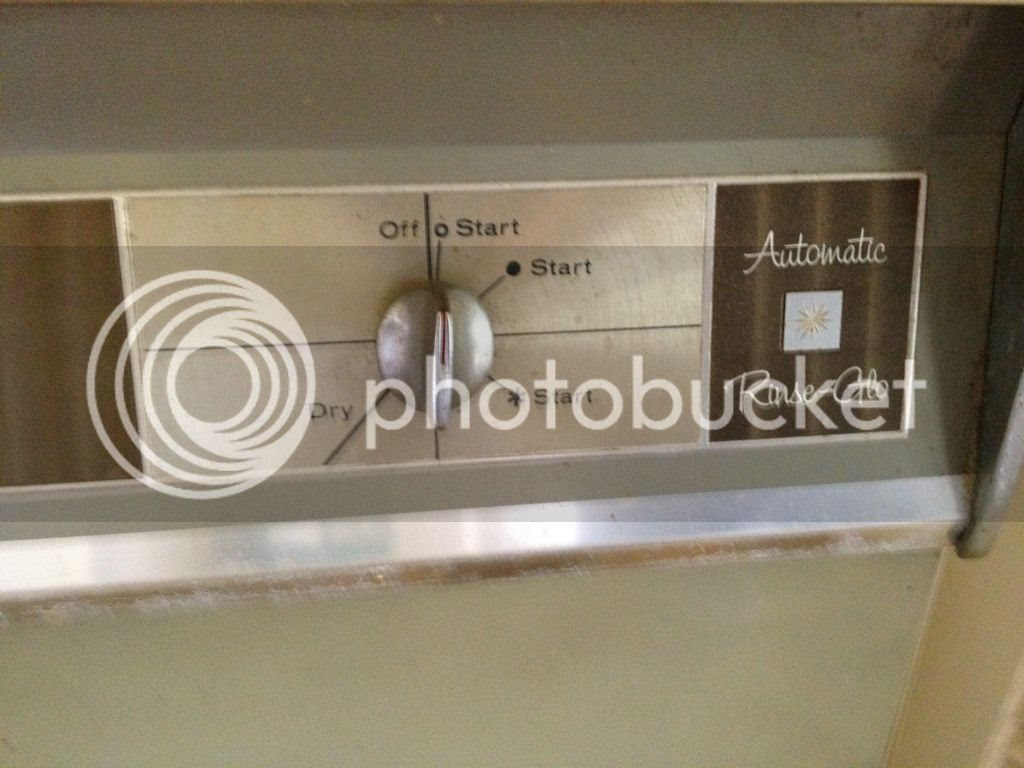 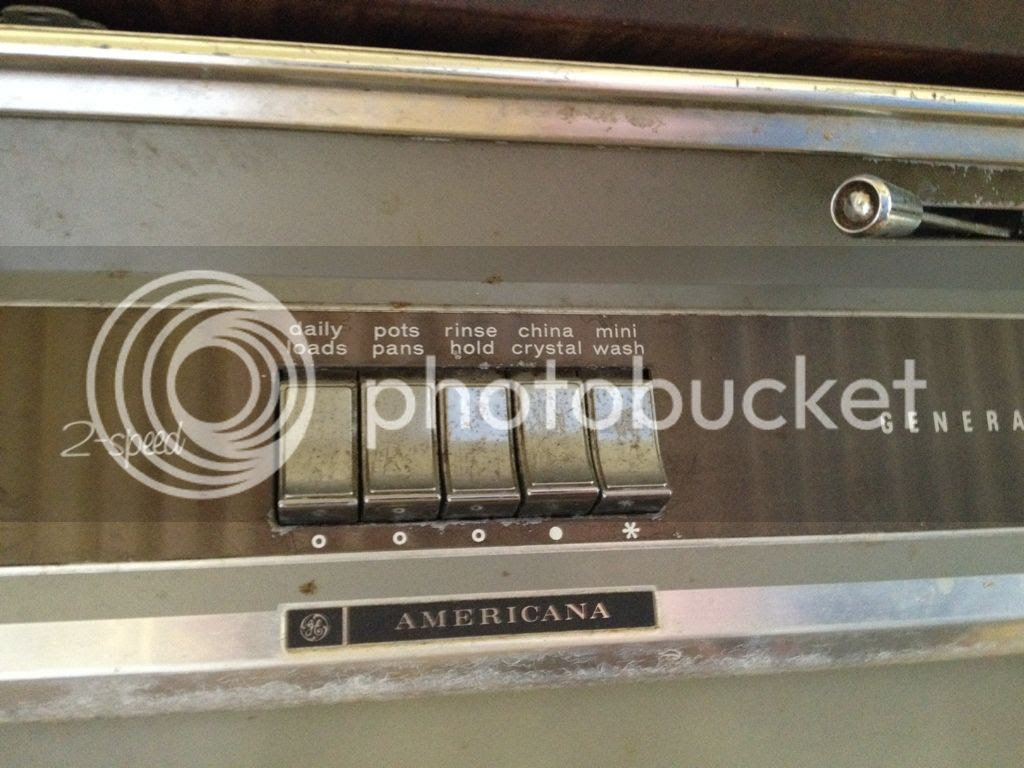 Is it practical?  We'll have to see.  I hope it will fit in the hole where our current broken dishwasher resides. Worst case, maybe I can scavenge it for parts to fix the built in one we have. Fortunately they're the same brand.  (I haven't replaced our dishwasher because every time I start researching new ones and I look through online reviews by current owners, I tend to learn that the circuit board has gone bad after only a year or so.  We haven't minded hand washing the dishes, but I would like the convenience of a dishwasher again.)

I shot a few photos of things I didn't buy, including this nice aqua oven which was in the house where I found the bread box.  It was priced around $100 -- hopefully someone saved it, maybe on half price Sunday. 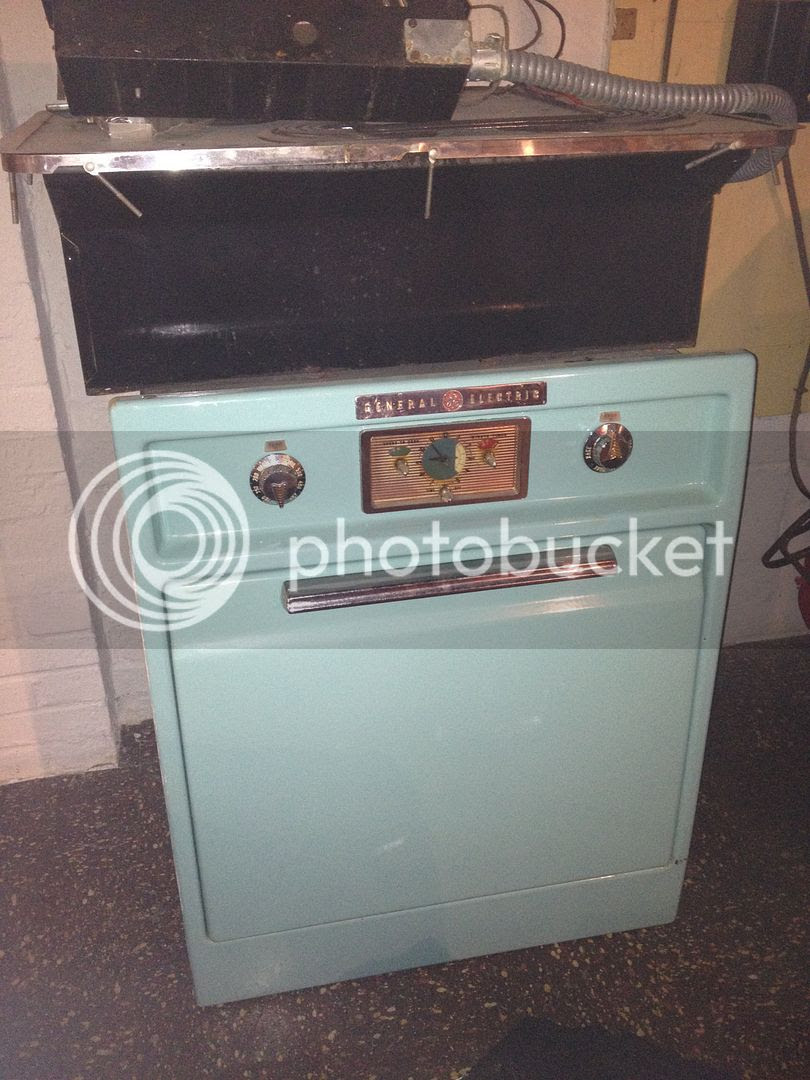 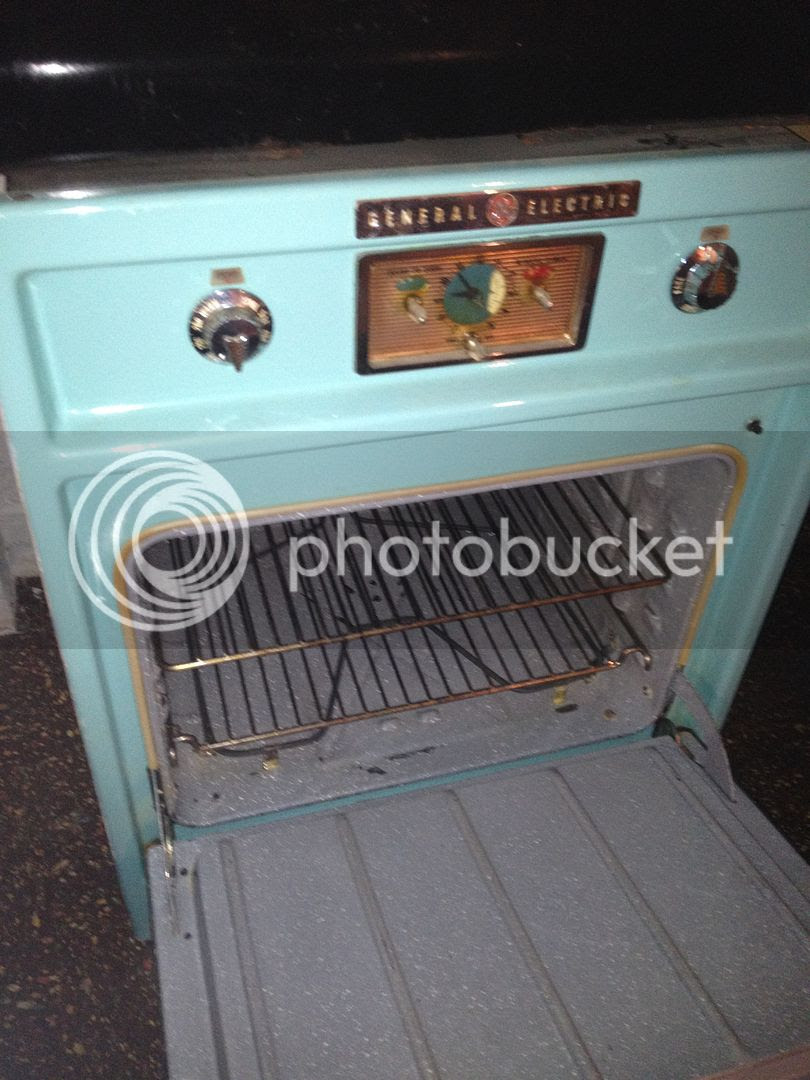 Yesterday I saw this 1970s table and L-shaped bench for a breakfast nook.  For just $50 it looked like a good deal for someone.  Today, Sunday half-price day, it still didn't have a taker at $25.  Sad. 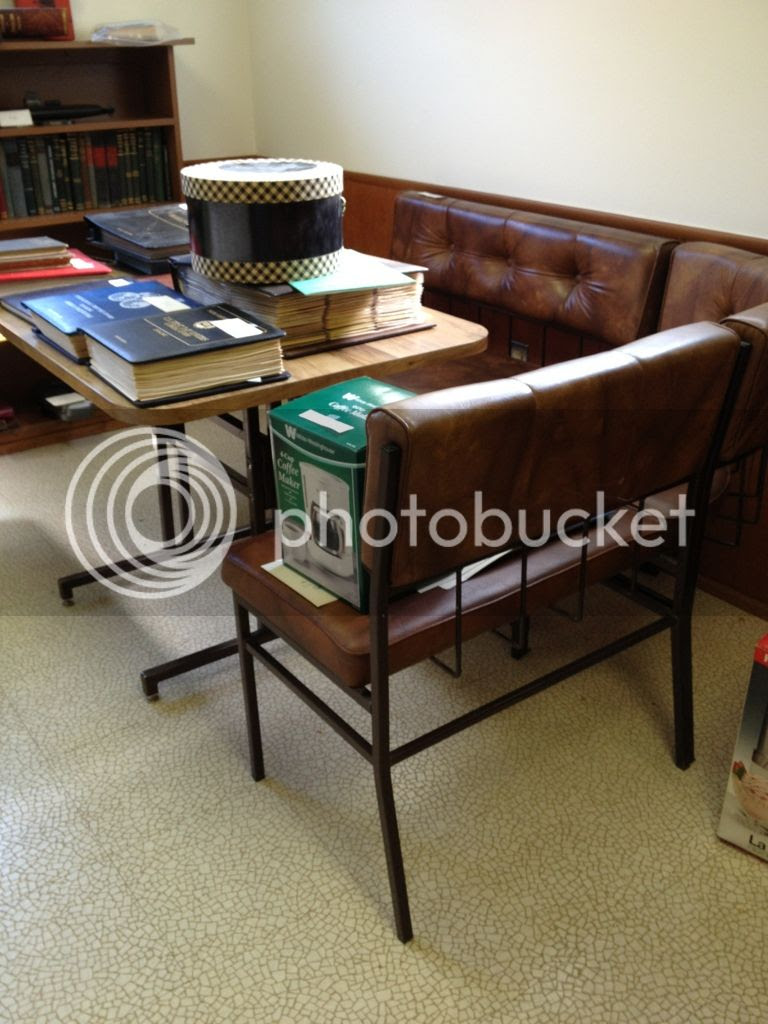 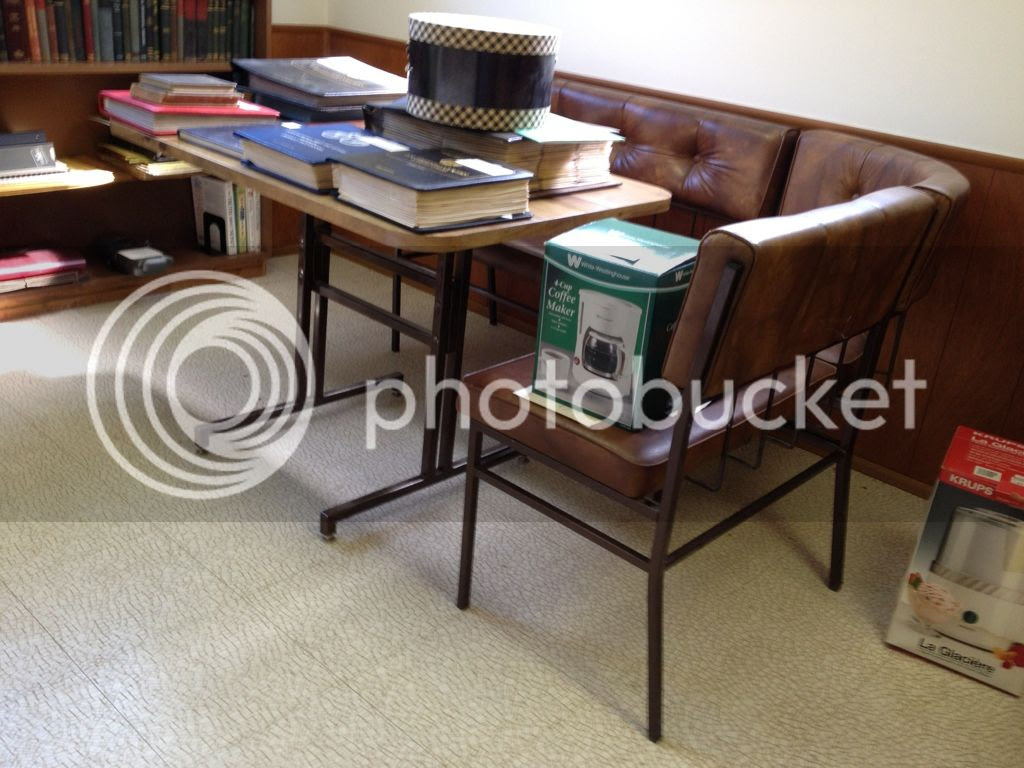 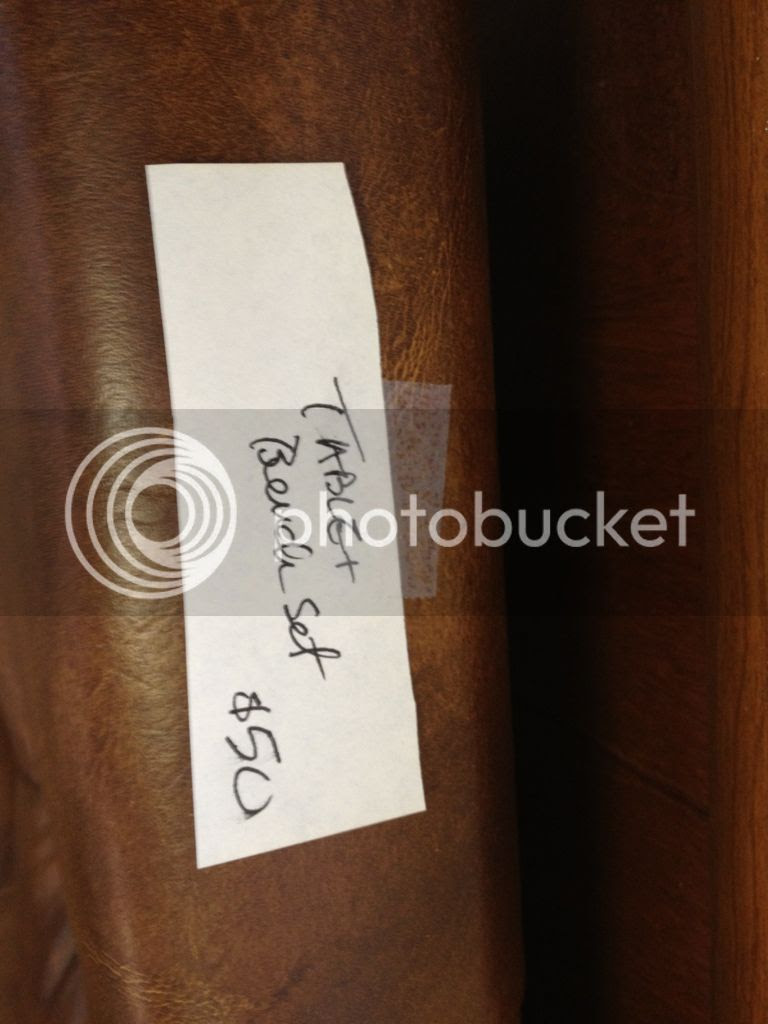 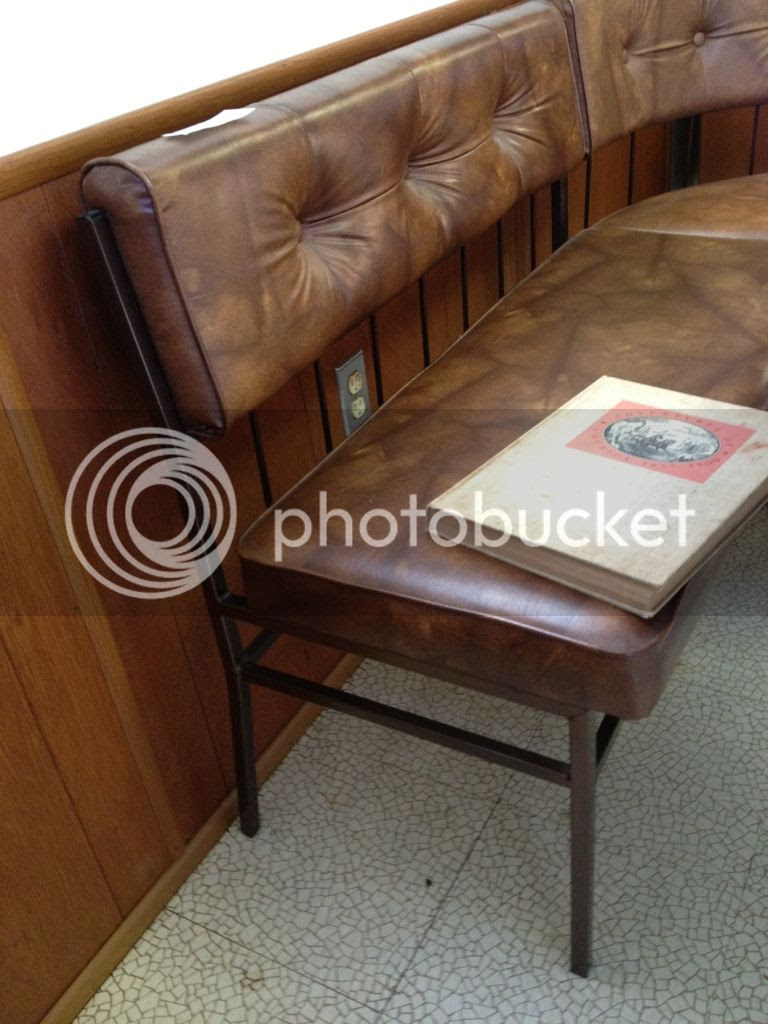 This convertible loveseat/sofa was also $50, and the upholstery looked good.  It was marked sold when I arrived this morning for half-price day. 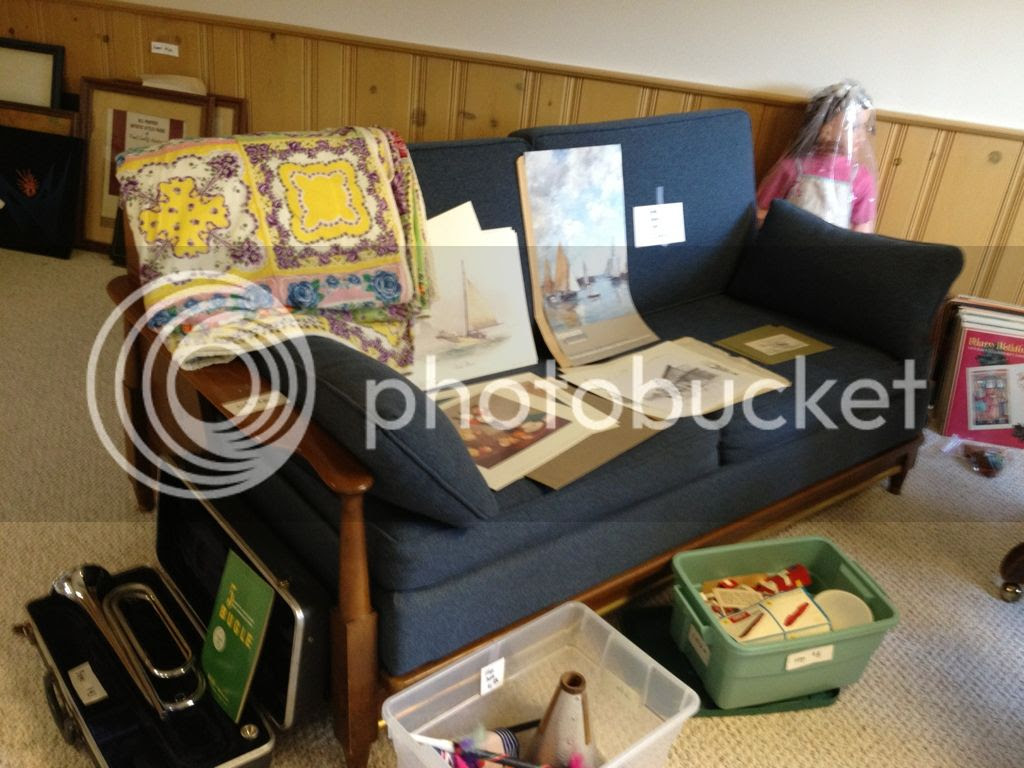 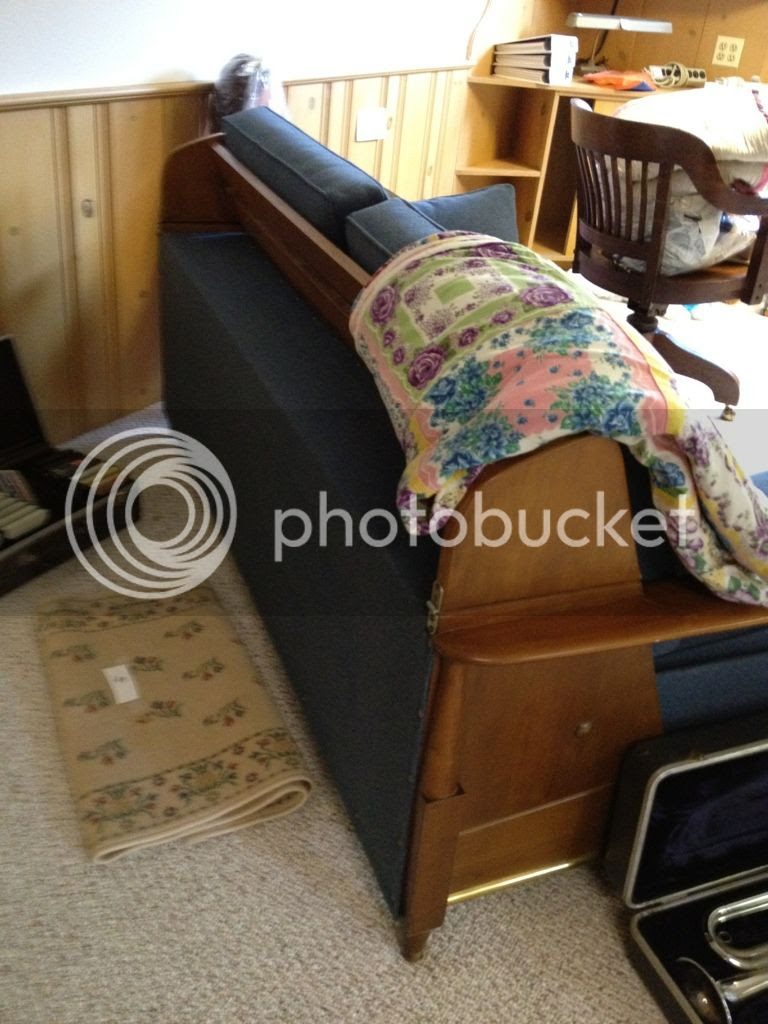 I didn't try to fold it out, but the top part of the back folds backwards and then I think the rest of the sofa flattens out to make into a bed (?).
Posted by Uncle Atom at 2:57 PM