I've been to many vintage car shows over the years, and to me the old accessories that sometimes accompany the cars make the experience feel a little like time travel.  For a few years I had a 1969 Mercury Colony Park station wagon with a big-block 429 engine (the BUSS 429 name I had for it was a tongue in cheek pun honoring Ford's 1969 Mustang.  When it was bought with a similar 429 engine Ford marketers called that Mustang the BOSS 429).

Anyway, to me half the fun of taking the wagon to shows was setting the car up on the show field with accessories from the same era.  The car had a McGovern-Shriver bumper sticker from the 1972 Presidential election (bonus points if you know who won that election).  I also had a picnic basket, some vintage copies of old magazines (Mad, Life, etc.) and some 1970 baseball cards sitting on the back seats, and some old suitcases tied to the wagon's rooftop luggage rack.  The whole effort was to make the car look like a family on a long vacation had parked it just a minute ago.  Pretty cool and it got a lot of nice remarks from show goers.

So for this post I have photos of a couple of vintage coolers.  This first one - the aluminum Miller High Life beer cooler - I bought at my favorite local flea market, and as I recall I got a good price on it. 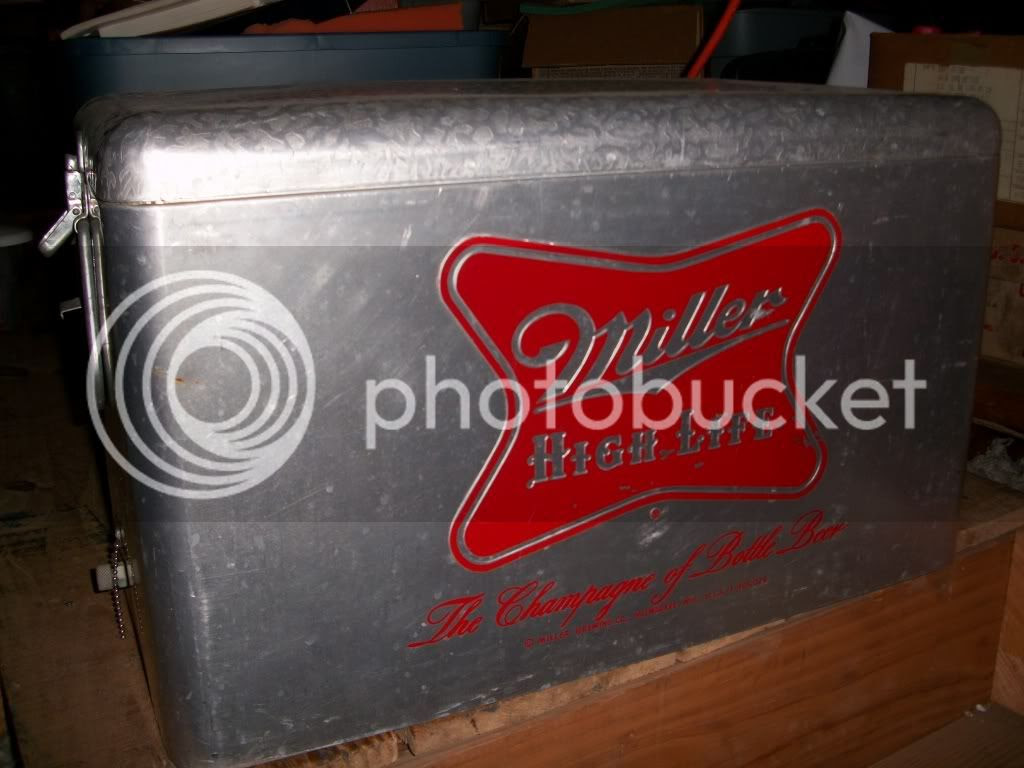 And here's a shot of the old Uncle in the wayback seats of the Colony Park, cooler by his side while he's enjoying a savory car show hot dog. 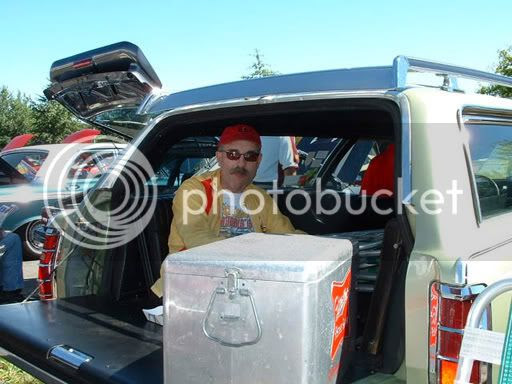 This next cooler is a duplicate to one that appeared in the picnic scene of an episode of Mad Men.  If you've ever watched that show, and I highly recommend it, it's a great kick to see something you either have or remember seeing in the early 1960s. 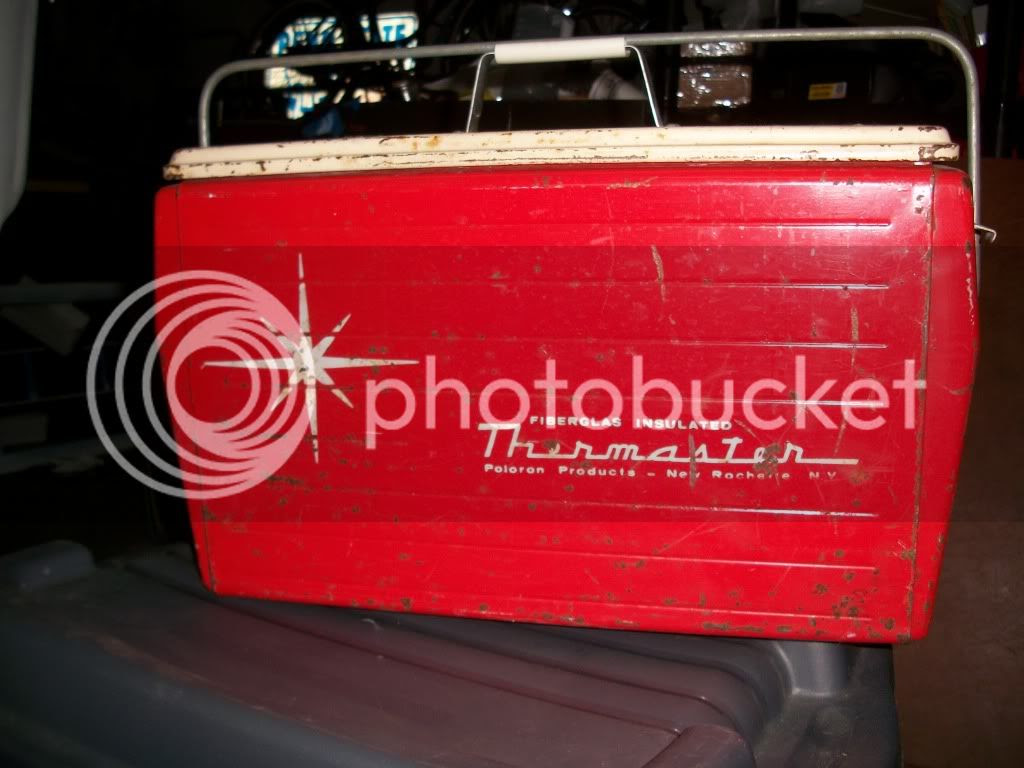 I've had this Thermaster cooler for several years and wanted to restore it, but held off.  And luckily I did, because a couple of years after I found it, I found it's twin, but someone had taped carefully around the logos and tried to use a rattle can of red paint to make it look better.  Only the red was the wrong shade of paint so it looked worse. I got that one for a good price, and now that I had two I figured I would remove the bad paint and logo, clean it up and repaint it to match the paint on the Shasta.  Here's the result: 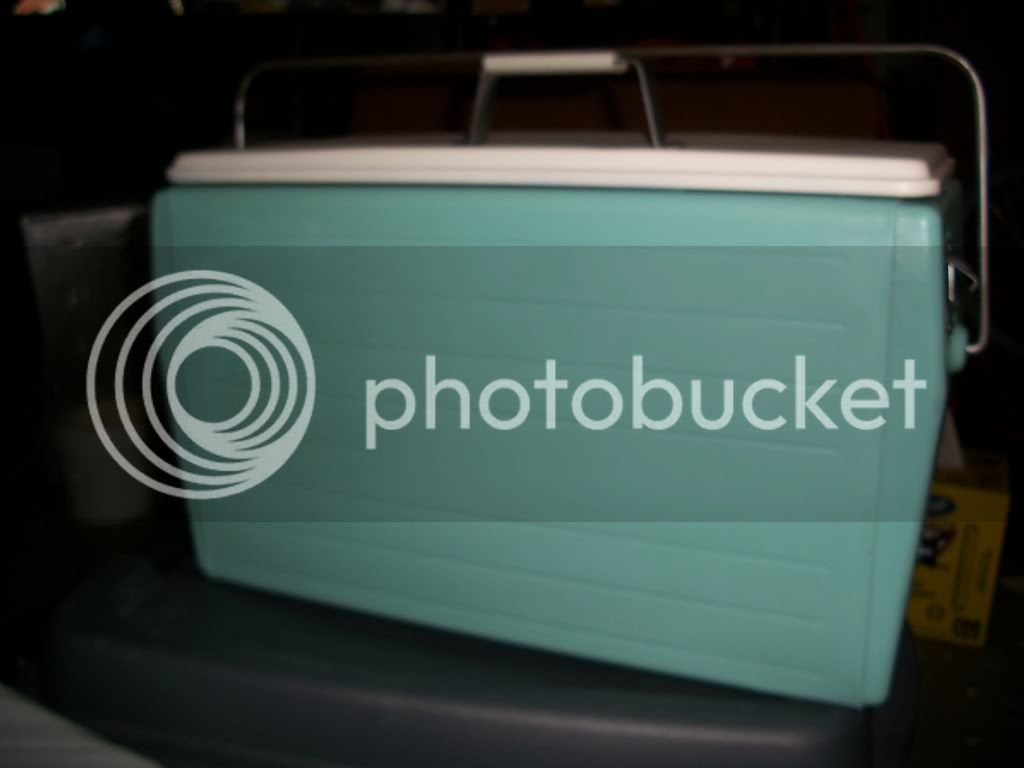 It's still missing the logo, and I want to get as close to reproducing the font as I can. Originally I traced the old font and planned to try and cut out a mask to spray paint the logo on the refinished surface, but the tracing is hard to get perfect and I didn't like the masks I made.  Later, I stumbled across a web page (see my Links section) called Tack-O-Rama where you can find some outrageously cool Postscript fonts with great mid-century vibes.  One of them, called Air Conditioner, is a nearly perfect match to the Thermaster font on the cooler!
Armed with the right font, I figured I would try using some special inkjet paper that's supposed to be good for making water slide decals.  So far, my attempts have failed badly, so the turquoise cooler remains logo-less.  But I'm hoping I can get some heavier stencil paper and print the logo onto that then cut it out with an exacto knife and try masking things off so I can spray paint the logo onto the cooler.  Hopefully I'll have a nice finished product to show off, and if that effort succeeds I'll probably restore the red cooler back as close as I can to original.  Stay tuned.  Better yet, Stay Cool! - I know I will  ;-)
Posted by Uncle Atom at 6:07 PM

Email ThisBlogThis!Share to TwitterShare to FacebookShare to Pinterest
Labels: cooler